This may sound strange, but did you know that writing a good scene may not be right for your script – sometimes only a bad scene will do.

This week I reached a climactic point in my current project. Moved on past the climax – and then stopped dead. It wasn’t exactly writers’ block. I wrote a sceneand it was OK, but something was wrong.

I was trying to write a good sceneand it wasn’t working. I spent some time thinking of all the alternative good scenesand none of these worked either.

As Sherlock Holmes said (more or less): if you’ve eliminated all the 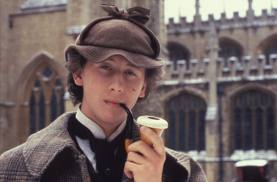 probable answers, the one that’s left, however unlikely, has to be the solution.

Or to put it another way, if the good scenes don’t work – the only thing left is to write a bad one. At least if I wrote a bad scene, I could move on, stop thinking about it and I could always come back later and revise it (maybe even cut it altogether).

A bad bad scene can fool you into thinking it’s a good scene. A bad bad scene is a scene that has superficial technique but nothing underneath. The lights are on, but nobody’s at home.

My failed good scene was actually a bad bad scene. It ticked away beautifully, was well written, with humour and style – and went absolutely nowhere. It was a fake. The characters had no goal. Nothing happened. It was fundamentally dishonest. It sat there, like a boulder in the stream, stopping the flow.

Bad bad scenes generally come from the desire to be good rather than truthful.

I scrapped it, and wrote a deliberately unstylish scene. A good bad scene is one that may be clunky, inelegant, may break all the rules of technique – but it’s honest and it gets the job done.

I eliminated all attempts to make it funny or attractive. No clever visuals or sharp dialogue. I just put down the action that was needed to go from the scene before to whatever followed.

In the process, I freed up the story. The characters were able to be truthful and follow their needs. We moved on.

Have a look at your scenes – are there any bad bad scenes lurking there, pretending to be good? If you’re stuck, check to see if you’ve been so clever you’ve jammed yourself in a stylish cul-de-sac.

Cut all unnecessary technique. Scrap attempts to polish what doesn’t deserve to be polished. Throw out cheap jokes, false tension and unearned emotion.

And be happy to be bad.

Professional writing is about knowing more than one way to solve a problem. There are many different skills that go into writing strong and effective scenes.

If you found this interesting you may enjoy one of my favourite workshops – the ScreenPLAY Advanced Summer School – so called, because you learn by role-playing. Essentially you pick up skills in the fastest and most effective way, by working like a studio screenwriter.

It’s a very powerful way to become a solid confident screenwriter, with the knowledge to deal easily with the daily demands of screenwriting.

Come and dare to be bad!

Review: The Portrait of a Lady

A stocking filler for the criminal in your life